Downside of Medigap Plan F with Extra or Innovative Benefits 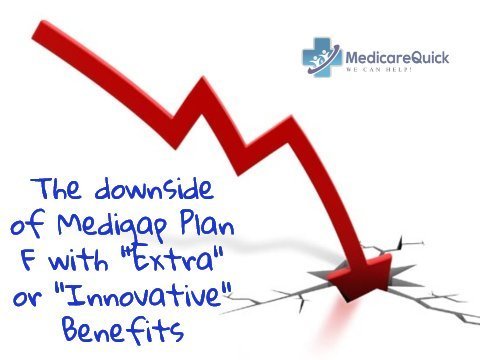 What's the downside of Extra or Innovative benefits for the Plan F Medigap Insurance Policy?

I wanted to talk to you about something that is super important in the Medicare supplement, also known as Medigap industry. It's happening right now in 2019. It actually started in 2018 but I've been doing some research because I really had kind of a gut feeling about what's been happening and I think I'm right. So, let me back up a little and tell you what's going on.

There have been several companies who have created their own Plan F versions.

Number one, Medigap plans were designed to be standardized. These insurance companies that are coming up with their own Medicare supplement plan, they're making it hard to do comparisons. And that is one reason we like Medigap plans is because they're easy to compare.

With all of these new benefits that some insurance companies are adding to Plan F, it makes it more difficult to compare.  And not only that, but it's very unclear if you are in the state of California if these new plans are covered under the birthday rule. I've talked with different vendors and some vendors say that they're covered. However, other insurance companies are saying, NO, they are not accepting transfers from other companies plan F's because it doesn't fall under the birthday rule.  They say it's because their benefits are actually higher and if you take a look at the California law, there is no indication of these innovative or extra plans being covered.

How can that affect you?

Well, that means that if you have one of these plan F's and the rates skyrocket, how do you know that the regular Plan F insurance companies will accept them after the year 2020?

And the answer is that we don't, because those plans are not specifically covered under California law. So, if you currently have one of these extra plans or innovative plans, I highly urge you to look at what another regular traditional plan F would cost. Or even maybe a plan G because I just don't want to see you caught in the future, 5 or 10 years from now and not be able to change your “Extra” or “Innovative” plan F.

There is a California Bill called SB 407, which would restrict insurance companies from offering these plans (in California).

It would still allow insurance companies to offer these extra benefits but as a rider. In other words, the extra benefits could not be embedded in the plan itself. So as far as I know, they could make that rider free if they wanted to or they could charge a small amount for it. So, I urge you to look at the bill that is being passed around and contact your congressperson to voice your opinion on these insurance companies offering these extra plan benefits to Plan F. It sounds great now, but I'm just a little concerned about what will happen in the future. Is it going to restrict you from being able to make the changes that the state of California promised you? I don't know of a national law at this time, but I do know of the California bill.

One criticism of the bill is that it might restrict companies from offering gym memberships as part of their plans.  However, gym memberships are usually not embedded in the benefit. For example, one major company recently removed Silver Sneakers from its Plan F.  It was allowed to do so because the gym membership is not part of the plan itself.

Karen Fletcher of the CA Health Advocates wrote an article regarding these plans and the CA bill (SB 407). You can read her article HERE

To contact us about making a change to a standardized Medigap plan, call 866-445-6683 or send us a message on our Contact Page